Some of these books are better for young children, while others are in-depth and written for teenagers. Especially for your critically-thinking teens, look for texts that consciously value intersectionality, which is the idea that overlapping definitions, including those of race, class, ethnicity, religion, gender, and sexual orientation, vary per person, changing the way they experience and react to discrimination, inequality, and other societal issues.

There are hundreds of deserving books with LGBTQ characters and themes, but here are some of today’s most popular, inspiring and inclusive publications. They can be found on Amazon and wherever books are sold. 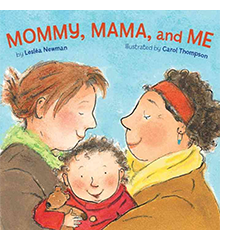 Mommy, Mama, And Me and Daddy, Papa, And Me by Leslea Newman and Carol Thompson

Though they are for toddlers rather than young children, these popular light hearted board books explain that same-sex parents can have different roles in the household, and form a family that goes about their daily life no different from any other. 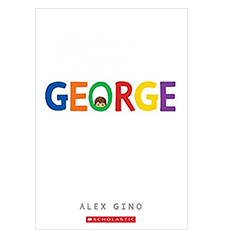 George seems to be the only one who realizes that she is a girl. When her class starts planning to put on a play – Charlotte’s Web – she is determined to play Charlotte, even though there are barriers in her way. With the help of a friend, she hatches a plan to let the world see who she really is, even as her own family seems unaccepting. 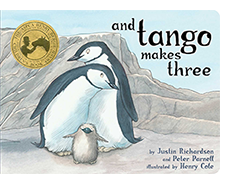 And Tango Makes Three by Richardson, Parnell, and Cole

Illustrated by Henry Cole, this cute picture book is a celebration of love. And Tango Makes Three is a gentle true story of two male penguins in the Central Park Zoo who want to start a family. It was written by playwright and producer Peter Parnell and Dr. Justin Richardson, who is assistant professor of psychiatry at Columbia and Cornell and who lectures on parenting and the sexual development of children. 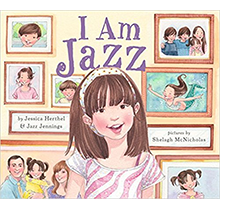 I Am Jazz by Jessica Herthel and Being Jazz: My Life as a (Transgender) Teen by Jazz Jennings

Jazz Jennings is one of America’s most famous transgender advocates. She was named one of “The 25 Most Influential Teens” of the year by Time, was interviewed by Barbara Walters and Oprah, met with Barack Obama, and now has her own TV show. 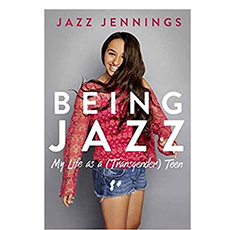 In Being Jazz, Jazz writes frankly about her life, discussing acceptance, bullying, transitioning, and her personal choices. The memoir includes great resources for LGBT students, from books and media to community safe spaces. 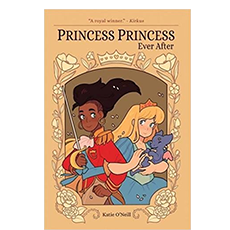 Princess Princess Ever After by Katie O’Neil

Princess Sadie is tired of princes trying to rescue her from her tower, until the day Amira, armed with a grappling hook, comes to save her instead. Fierce and independent, Princess Amira helps the shy and kind Sadie on an adventure across the kingdom. Together, they face ogres and Sadie’s mean older sister. Written in comic-book format for ages 9-12, Princess Princess is funny, romantic, modern, and joyful. 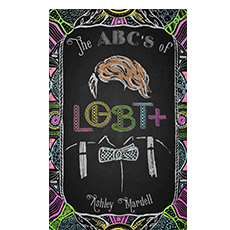 The ABC’s of LGBT+ by Ashley Mardell

Written by a popular video blogger and YouTuber, The ABC’s of LGBT+ was created for questioning teens as well as adults, teachers, or parents looking to learn more about gender and sexual identity as well as the applicability of various labels. The book includes a helpful glossary as well as awesome illustrations. 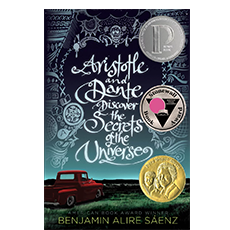 In this honest and moving book, two teenage boys (Aristotle and Dante) become best friends in 1987 El Paso, Texas. Challenging each other’s disparate personalities, they help each other grow as they face personal challenges. Literature plays a role in the story as the characters work through questions of sexuality, family life, mental health, PTSD, anger, and racial identity. 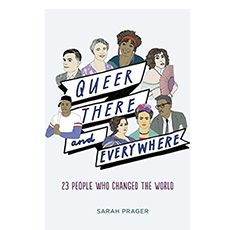 Queer, There, and Everywhere: 23 People Who Changed the World by Sarah Prager

Prager is an activist and history buff as well as the creator of the Quist mobile app. While by no means exhaustive, her illustrated book is accessible, modern, and even humorous. Teens can learn about some of the most influential LGBTQ figures from the Roman Empire to the present day using this resource; it is full of surprising facts and personalities, including Abraham Lincoln and Eleanor Roosevelt. 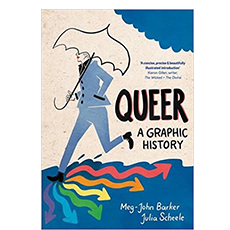 Best for older teens, Queer explores Western cultural views of sexuality and biology, acting less as a history lesson and more as a sort of illustrated introduction to queer theory and gender studies. 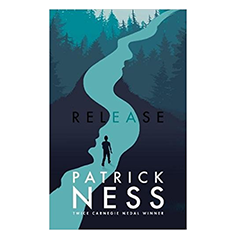 Inspired by Virginia Woolf’s Mrs. Dalloway and Judy Blume’s Forever, this is the story of the most difficult day of Adam Thorn’s life. The themes are supernatural (there’s a ghost), sexual, emotional, educational, and layered. Ness, Carnegie Medal-winning author of A Monster Calls, called Release the “most personal novel I’ve ever written. The one I wanted to read when I was a teen and never got.” 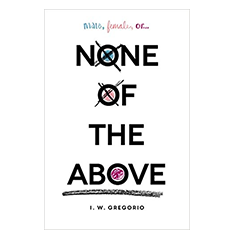 None of the Above by I. W. Gregorio

Kristin Lattimer is an average, happy, and successful high school student. But on the night she decides to take things to the next level with her boyfriend and things do not go as planned, she starts the journey to being diagnosed as intersex. It doesn’t take long before she goes from being popular to being ridiculed by her peers. Kristin suddenly has to ask herself some hard questions and find why her diagnosis does not change who she is and what she hopes for. 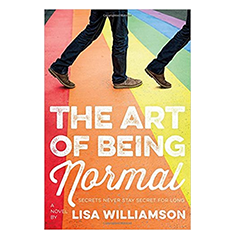 The Art of Being Normal by Lisa Williamson

Two trans London teens, one closeted and one “out”, navigate high school life, forced to live with serious bullying, notoriety, the difficulty of coming out to family, and the pains of changeable teenage romance. 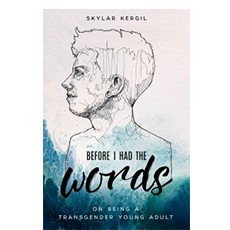 Before I Had the Words: On Being a Transgender Young Adult by Skylar Kergil

This poignant autobiography is written by a popular YouTuber. Since age 17, Kergil filmed videos documenting his physical and emotional changes, talking about surgery and testosterone treatment, mental health, society, and school. Before I Had the Words is the rest of the story, including his family’s acceptance, his changing self-image and name change, and dealing with the many emotions that come with being different. Fans of this book should also check out the popular Trans Mission: My Quest to a Beard by another YouTuber, Alex Bertie. 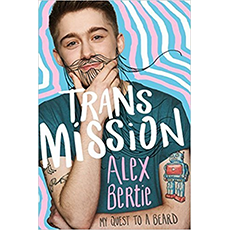 Fans of Before I Had the Words: On Being a Transgender Young Adult by Skylar Kergil should also check out the popular Trans Mission: My Quest to a Beard by another YouTuber, Alex Bertie. 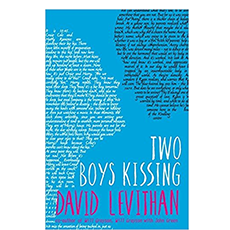 As Craig and Harry struggle to break the world record (over 30 hours) for kissing – a symbol of pride and strength for the LGBT community – other stories of very different people are interwoven throughout the book, from couples still defining their relationship to Tariq, who was attacked by homophobes, and Cooper, who talks to men online. Levithan co-wrote Nick and Nora’s Infinite Playlist, and other books. 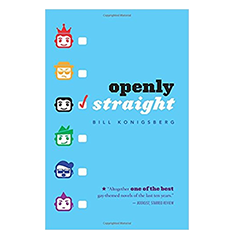 A fun, quick read that questions why and how we treat LGBTQ people as the “other.” Rafe is a high school student, out and proud – but being gay has become too much a part of his identity, from his mother being extra-accepting to his classmates pigeonholing him as “that gay guy.” He decides to attend a far-off, all-boys school instead, keeping his sexuality under wraps. There, he meets Ben, and has to decide if the secret is still a secret. 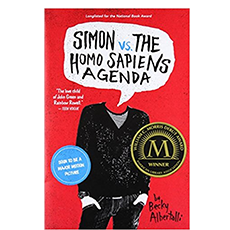 Simon vs. the Homo Sapiens Agenda by Becky Albertalli

Soon to be a movie (Love, Simon comes out in 2018), this is the cute and funny high school love story of Simon and Blue, a fellow student who Simon has fallen for through email. Unfortunately, someone else finds about about their exchanges and blackmails Simon. Will he submit, or will his secret be exposed for the world to see? 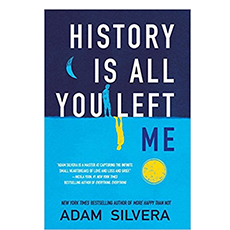 History is All You Left Me by Adam Silvera

Written by the author of They Both Die at the End, History is All You Left Me deals with major themes such as death, depression, and the main character Griffin’s Obsessive-Compulsive Disorder. Griffin must find life after love when his first love and ex-boyfriend Theo dies, hundreds of miles away. Still in love with him, Griffin finds difficulty in opening up to anyone and moving on. Meanwhile, the story weaves through past and present, and Theo’s newer love interest deals with his own grief. 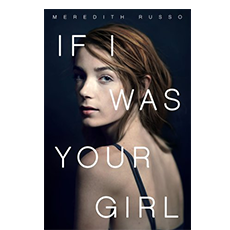 If I Was Your Girl by Meredith Russo

Amanda’s life is looking up. She just moved to a new town to live with her dad and has met the sweet and easygoing Grant. But he knows almost nothing about her past, even as their relationship blossoms. And even as Amanda tries to blend in and finish high school, everyone around is interested in who the new girl could be.