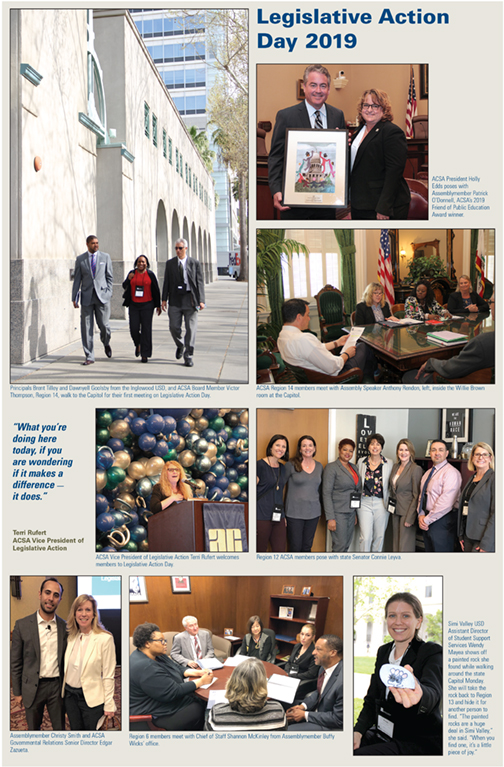 More than 400 members walked the halls of the state Capitol to advocate for ACSA’s key issues for 2019: increased LCFF base funding, mental health, and equitable funding for special education students.

The two-day event kicked off Sunday at the Sheraton Grand Sacramento Ballroom with opening remarks from ACSA Executive Director Wes Smith urging members to go out and tell their stories to legislators.

Keynote speaker for the afternoon, Assemblymember Christy Smith, D-Santa Clarita, continued that theme, sharing her own story. A former analyst with the U.S. Department of Education during the Clinton administration, she returned to her homestate of California to raise a family. As a mother, she was “that mom” — active in the PTA, directing talent shows and volunteering as an art docent. She was prompted to run for school board after launching a technology education foundation.

“I was so incensed that we had tech standards that were mandated and no funding to put the equipment in the classroom,” she said to a round of applause.

She urged members to speak their truths, knowing full well that education might not be the top priority for the legislators they will be meeting with.

“How you tell a compelling story is what’s going to convince people like me that we need to really take a deeper look,” Smith said.

Regions then broke up into groups to go over the logistics for the day at the Capitol, including deciding which members would meet with the legislators in their region and identifying the stories they would be telling.

“Advocacy should be part of all of our job titles,” she said. “What you’re doing here today, if you are wondering if it makes a difference – it does.”

President/Partner Kevin Gordon and Partner Jack O’Connell with Capitol Advisors presented some advocacy tips to help with the day.

“The reason you’re special is you’re going to make that issue local [for legislators],” said Gordon.

With closing comments from Rufert and ACSA Federal Governmental Relations Senior Director Adonai Mack, members headed out to the Capitol to hold more than 100 meetings with legislators and their staff members.

“Make sure your voice is heard. Make them hear it loud!” Mack said.

Members advocated that funding goals set in the Local Control Funding Formula need to be adjusted to reflect current and future education needs. Members asked for support on AB 39 (Muratsuchi) which provides an avenue to achieve those objectives. The bill, co-sponsored by ACSA, increases the LCFF base grant, with corresponding increases to the supplemental and concentration grant amounts through the existing formula structure that would set California closer to achieving a per-pupil funding rate at the national average.

“[Legislators were] all aware of education issues and easy to engage on the importance of mental health and increasing the ceiling to LCFF and Prop. 98,” said Charlie Hoffman, ACSA board member from Region 1 and superintendent of Shasta-Trinity ROP/Bella Vista Elementary, reflecting on his meetings with legislators.

“More and more students are coming to us in despair,” ACSA Region 18 President Kim Phifer told a panel of Assembly education staffers. “The school is the intake. … We are the safest place [our students] come every day.”

During a meeting with Assembly Speaker Anthony Rendon, Roxanne Allessandro, an assistant principal in the Paramount USD, shared how investing in social workers has paid off. She shared how one social worker who knew of a student having suicidal thoughts was able to do intensive outreach when that student didn’t show up to school — with calls, texts and even a home visit for a wellness check.

“Having that person available to handle a situation like that is the difference in that kid’s life,” Allessandro said.

ACSA members also shared concerns that teachers who know they don’t have the capacity to help a student with mental health challenges will often refer them to special education.

“Students are learning to say ‘I want to kill myself’ instead of saying ‘I need help’” said Angelica Montelongo, principal with Bellflower USD, during the meeting with Rendon.

“Twenty percent of our budget goes to one student,” she said. “We have cut everything we can.”

A teacher with more than 20 years of experience in the classroom, O’Donnell was elected to the California State Assembly in 2014 and was appointed chair of the Assembly Education Committee in his first year.

Most of the bills he has introduced are education-related bills. Some that have been signed into law include improving the learning environments for LGBTQ students, preventing student suicide, streamlining school facilities construction, establishing media arts standards, ensuring English learners have access to core curriculum courses, allowing college students to major in education, keeping immigration enforcement out of schools, and making the Long Beach College Promise a permanent program.

For the first time, Legislative Action Day featured four panel discussions throughout the day that provided members a chance to interact with key state-level staff.

In between their meetings with legislators, members dropped in on sessions with staff members from the California Department of Education, the Assembly Education Staff, Senate Education Staff, and Gov. Gavin Newsom’s staff.

Between meetings, members could also visit the hospitality tent, sponsored by Grand Canyon University, for refreshments and a chance to catch up with colleagues.

“I felt like they were really listening and definitely informed on what we want. They asked good questions like, ‘How do you think we can fill your request?’” said Leslie Wagonseller, principal, Orcutt Union SD, Region 13.

“To sit around the table with other administrators and glean how they approach conversations with legislators and how savvy they are with information — I have to up my game a bit,” she said. “But we’re not in this alone. There are lots of layers of support.”

ACSA regions have selected the winners of the 2019 Every Student Succeeding Awards. Students were chosen fr...

The Harvard Graduate School of Education released a report explaining how the high-stakes pressure to get i...