The board approved the framework, but not before removing five reference books for educators that provoked the most heated opposition.

The framework, which is optional and does not mandate specific curriculum or instruction methods, includes updates on teaching sexual health content as mandated by the 2016 California Healthy Youth Act. 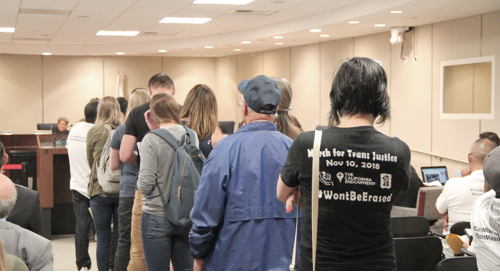 The CHYA requires that students receive medically accurate and unbiased comprehensive sexual health education and HIV prevention information once in middle school and once in high school.

Parents can opt out of CHYA completely — schools must inform parents first so they have the option — and sexual education is not required until 7th grade, although districts are permitted to include lessons sooner.

According to the CDE, the framework’s focus is on guiding districts and teachers as they develop curriculum and instruction that enables students to make healthy choices and avoid high-risk behaviors. The framework’s guidance also includes suggestions on the use of gender-neutral and LGBTQ-inclusive language during health instruction to make classrooms safer learning environments free from bullying and harassment.

The framework is the culmination of work that began in 2016 that included focus groups and establishment of a Curriculum Framework and Evaluation Criteria Committee. The committee, which was largely composed of teachers, met six times and held two rounds of public comment that generated more than 3,000 phone calls, letters and emails to the CDE.

These comments centered on support for inclusivity, the California Healthy Youth Act and its parental opt out provision, religious diversity, and language choices, according to staff.

Some parents who spoke during public comment expressed that they wanted to decide what and when to teach children about sex and gender. The often emotional comments centered on the referenced books being uncomfortably explicit, with cartoon depictions of male and female anatomy that some viewed as “pornographic.” Speakers, many from religious groups that mobilized in advance of the meeting, shared concerns that the framework is a “document of indoctrination” on LGBTQ identities.

One teacher spoke about being afraid the framework could cause an “exodus” out of public schools and teachers who are afraid of being accused of discrimination if they don’t use appropriate non-binary language.

Others testified in support of the framework, stating that many students may not receive sexual education at home despite needing this information to make healthy decisions. Public commenters who are LGBT shared personal stories that had they been exposed to inclusive sexual health lessons, it might have reduced stigma and saved them from self-harm. Supporters said the framework gives teachers, even those without health education backgrounds, the resources to answer real questions that students have about sex, gender and sexuality.

Although the books were provided solely as resources, the Instructional Quality Commission recommended removing the books from the framework in its March 28 meeting.

“Misinformation about these books has created panic that California is mandating the use of certain books, which is not true,” said Board Member Feliza I. Ortiz-Licon. “It’s important to note that the board is not trying to ban books, we’re not saying that the books are bad.”

The framework also includes updates that cover numerous other health issues, including obesity, safety, drugs/alcohol/tobacco, mental health, violence, health disparities, sexual consent, and an appendix on sex trafficking and sexual abuse that is meant to be a resource for educators and the community.

“Equipping our students with the tools they need to protect themselves from these challenges requires honesty, accuracy and thoroughness,” said Ortiz-Licon.

In other business, the State Board of Education also:

• Approved transitioning to computer-based testing for the English Language Proficiency Assessments for California. CDE staff reported that computer-based tests for both the Initial and Summative ELPAC will result in a number of benefits, including faster turnaround time, with results available around two weeks earlier. In public comment, speakers raised concerns about students with little or no experience with computers being able to take the assessments. According to CDE staff, practice tests for all grades will allow screeners to assess if the student can take the tests independently on the computer. Students will also take computer tests one-on-one with test examiners in grades K-2. Writing tests will remain in the paper/pencil format for grades K-2. The switch to computer-based assessments will take place in the 2019-20 school year for the Summative ELPAC and the 2020-21 school year for the Initial ELPAC.

• Approved development of an Alternate ELPAC for students with the most severe cognitive disabilities. This assessment would be administered one-on-one for all students. A pilot study for this assessment will begin in January 2020.

• Approved the California Computer Science Strategic Implementation Plan, which will facilitate the equitable expansion of computer sciences in education.

• Approved a one-year waiver for size and scope requirements that will allow the creation of two single-district SELPAs for the Hacienda La Puente USD and the Rowland USD. Because these types of requests are increasing in frequency, the board asked staff to develop criteria by which it can evaluate whether single-district SELPAs can provide better service to students. “It’s because there’s an absence of real criteria that you really have no basis to say no,” said Board member Ting L. Sun. “I do agree that we do need to look at our policies approving SELPAs overall.”

Members of ACSA’s Leadership Assembly met in Sacramento May 8-10 for an update on the year’s progress and t...

Gov. Gavin Newsom’s May budget revision includes the most investments ever for the state’s nearly 6.2 milli...