Home » News » Once an ESS winner, now an Administrator of the Year
× Share this Article

Once an ESS winner, now an Administrator of the Year

Manny Nuñez knows the importance of relationships. It explains why he starts every morning by greeting every student at Seaside Middle School with a handshake, and why he was selected as ACSA's 2018 Middle Grades Principal of the Year.

“What it allows is for every kid to get noticed,” Nuñez, principal at Seaside Middle School, said. “There’s nothing more powerful than connection. Noticing you. Calling you by name. Saying, ‘Good to see you today. Do great things.’”

“It’s an honor to serve as the leader of a school that has students that look like me,” Nuñez said. “And more importantly, students that have a similar background or experience. You have the empathy piece because you understand.”

Nuñez grew up in a small village in Sinaloa, Mexico. He says access to education was limited due to a lack of resources.

“School was once in a while,” Nuñez said. “It was not consistent. You go to school maybe two or three days a week because there was a teacher that would roam around these small villages.”

When Nuñez was 3 years old, his father was murdered by the Mexican army for his involvement with opium poppy. His mom left Mexico for California in hopes of making money for the family. She brought Nuñez’s younger brother with her but Nuñez stayed in Mexico with his grandparents.

“I feel like she left for a good reason,” Nuñez said. “My mom would keep in contact with me. My grandma tells me that she would send money all the time. Whatever she could. Even if it was $50 or $100. And then we had the hope of reuniting.”

It would take seven years for that dream to become a reality. But on June 10, 1994, Manny, along with his grandmother, made it to the states.

Nuñez and his family lived in the Woodville Farm Labor Camp. He described it as a tight community but resources were lacking. Nuñez’s mom worked in the fields which meant he often had to fend for himself.

“I think in the labor camp, you could easily be influenced to do things that were not correct,” he said. “And there was really no adult supervision. I can do whatever I want. Who’s going to tell me what to do?”

Nuñez started skipping school and as he describes, hanging out with the wrong crowd. The low point came when he spent two weeks at the Tulare County Juvenile Detention Center for breaking into a teacher’s car.

“I knew I was always smart,” Nuñez said. “But at that point, I didn’t make the right decision. I feel like I let a lot of people down.”

Those two weeks proved to be a turning point as he found a support system at Monache High School.

“He just had this inner glow and inner confidence,” former Monache High counselor Hank Handelsman said. “You could just tell the gleam in his eye. People saw his gleam and they adopted him.”

In 2003, Nuñez won the ACSA Tulare County Charter Every Student Succeeding award, given to students who have overcome tremendous adversity to get to where they are today.

“It meant a lot to me, that award,” he said. “And there’s a reason why it still sticks on my desk. It’s a reminder of where I’ve been.”

After graduating from UC Santa Cruz, Nuñez moved his family out of the labor camp. He started his career in education as a school counselor before moving into administration. Now in his fourth year at Seaside Middle School, Nuñez has worked hard to change the culture of the school.

“In a short amount of time, he has built a community in a variety of ways,” said Monterey Peninsula USD Assistant Superintendent Beth Wodecki. “If you come to back-to-school night, you’ll see a taco stand and a mariachi band. And people mingling about. And a real vibrant community feel that he’s building here.”

Nuñez says he was shocked after learning he was the recipient of ACSA’s 2018 Middle Grades Principal of the Year Award. In fact, he is the first person to win both the Every Student Succeeding recognition and Administrator of the Year.

“I came to this country with nothing,” Nuñez said. “Not even the language. And not even with documents. Use your story as a motivation to inspire others. But also as a reminder of how far you’ve come. And how far you still have to go.”

Nuñez and all of ACSA's Administrators of the Year will be honored at the President's Award Dinner, Nov. 9 in San Diego. 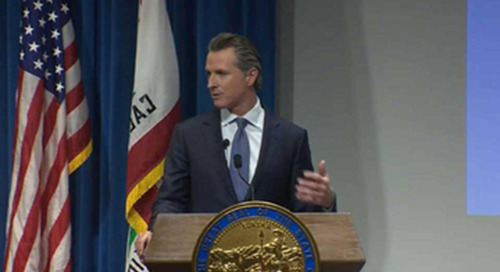 Gov. Gavin Newsom has been steadfast in his goal of strengthening California’s public school system.